Join our team! We are currently recruiting for a new, full-time Accountant position. Click here for the full job posting. 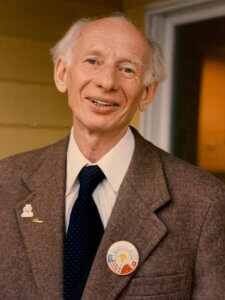 David Bell was born in Texas in 1921, and lived there until he was 10 when his father, inspired by the Russian revolution, moved the family to Russia. When Stalin came into power, his father was exiled to the Kazakhstan desert and the family was put on the street because they were Jewish.

As an adult, David became an English teacher and moved to Dubna, located at the confluence of three rivers about 70 miles north of Moscow.

In the late 80s, David heard of a peace lantern project in Leningrad led by physicians from La Crosse. David explored more connections to La Crosse, including a correspondence with former Mayor Patrick Zielke, and suggested a sister city relationship. A group in La Crosse formed that led the effort here. The relationship between the two cities was formalized with protocols signed on August 5, 1990.

The success of the La Crosse Dubna sister city relationship is evidenced by the breadth of the exchanges and numerous accomplishments, that include: various exchanges of scouts, high school and college students, and professionals; the creation of University of Dubna; the establishment of the first Rotary Club in Dubna (and one of the first in Russia); and, the introduction of the notion of voluntary service to Dubna. Robust medical exchanges resulted in several millions of dollars of US grants to Dubna that pioneered work in women’s health, alcohol treatment, hospital management, and a diabetes protocol that was adopted all throughout Russia. The Russian garden in the Riverside International Friendship Gardens honors this special relationship.

The intent of this agency fund is to honor David Bell and the joint vision shared between the cities; promoting peace through understanding. The fund will be used to support the broad purposes of the sister city relationship.